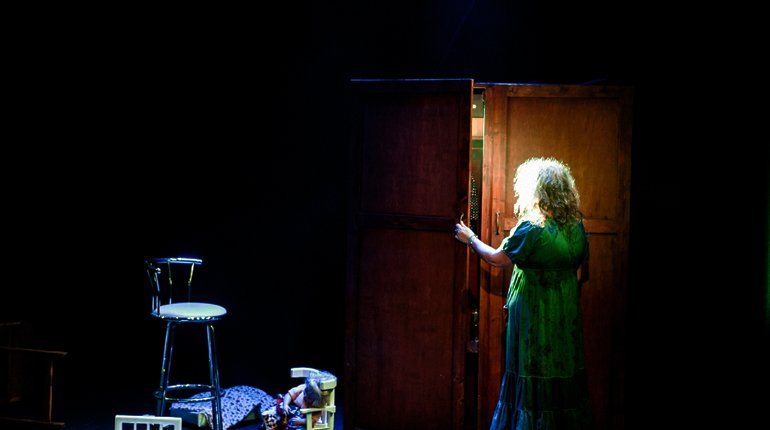 “This is a loving piece of theatre which will help us to understand the everyday challenges that arise on this particular journey. It makes for an absorbing evening.” No More Workhorse

Wexford Arts Centre in association with First Forthnight Festival is delighted to embark on a national tour of The Scourge written and performed by Michelle Dooley Mahon and directed by Ben Barnes.

The scourge (Michelle Dooley Mahon), relives visits to her mother Siobhan in a nursing home after she has been struck down by Alzheimer’s disease or what the scourge calls “death by a thousand cuts”. Through her humorous and moving memories we are introduced to personalities, history, and a nostalgic archive of an ordinary Irish small-town family forced to become extraordinary in their attempt to cope.

The production shines a light on an illness that is rarely discussed in detail. It takes us through the stages as the patient declines and describes the family’s implosion, the morphing of the scourge from wide eyed child into enfant terrible to obese depressed recluse and her re-emergence as a creator of her one woman show-Shellshock.

Adapted from the critically acclaimed novel Scourged by Michelle Dooley Mahon, The Scourge will take you on a journey like no other, a beautiful dedication of a daughter giving voice to a mother sadly silenced before her time. The Scourge was commissioned by Wexford Arts Centre with support from Artlinks and had sell out success runs at Wexford Arts Centre including during Wexford Opera and Fringe Festival.

The production is supported by Arts Council Ireland and Wexford County Council.

“Scourged is that most rare and wonderful creature, a book that is both entertaining and honest – like David Sedaris or Joan Didion before her, Dooley Mahon delves deep into the seam of the everyday, mining the ores of tragedy and comedy, shining a single headlamp as she digs, until the unsuspecting reader, laughed and cried out, is forced to go for a lie down” Eoin Colfer

Register for Event: The Scourge

Your ticket for the: The Scourge