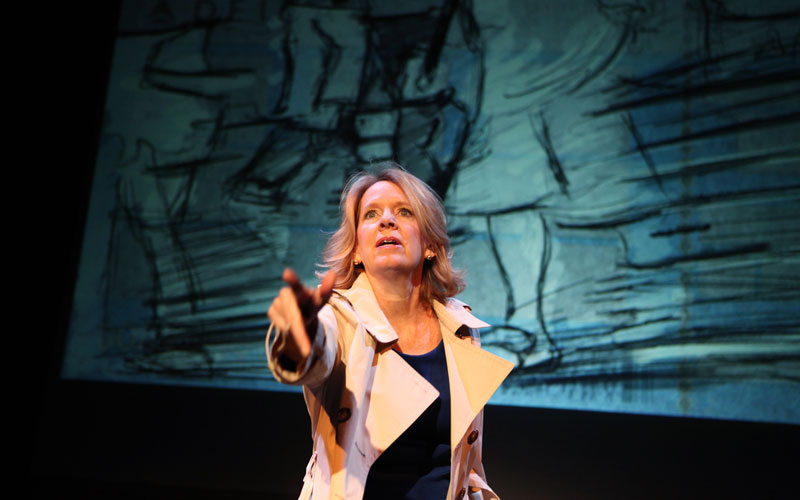 Performance in aid of the Donegal Hospice

“comic, tragic and endearing…a truly beautiful play with a heart full of love behind it” The British Theatre Guide

When Mary Lou Quinlan’s beloved mother, Mary Finlayson, dies, her family is left bereft—until Quinlan finds her mother’s “God Box,” or rather, boxes. These simple containers are stuffed with tiny notes written by Mary, asking and praying for everything from the right flooring for her daughter’s new home to a cure for her own blood cancer. Mary’s petitions are presented with love and without expectation. Note by note, Quinlan unearths insights into her mother’s compassion, faith, and perseverance, and revelations of her innermost thoughts—nostalgic, surprising, and even a bit shocking. And through the journey, the author discovers her own more empathetic, more engaged self—the woman her mother had believed in all along.

In this engaging one woman, one act play based on her New York Times bestselling book, Mary Lou explores the laughter and tears of the story of a family in love, in loss and in triumph. “The God Box: A Daughter’s Story,” performed by Mary Lou and co-written with director Martha Wollner of New York City’s critically acclaimed LAByrinth Theater Company, is an emotional rollercoaster of the heart. First presented as a workshop in New York City’s Irish Repertory Theater in November 2011, the show has traveled from NYC’s Off-Broadway gem, The Cherry Lane Theater, to The Kimmel Center Innovation Studio in Philadelphia, PA, The Warehouse in Greenville, SC and dozens of stages from Boston to Chicago, Indiana to Omaha. Thousands have followed Mary Lou’s journey to life’s ultimate challenge: learning to let go.

The production features the work of some of New York theater’s best and brightest sound, lighting and visual designers. After a sold out Off-Broadway run at 59E 59 Theater, the show rocked 24 performances at the prestigious Edinburgh Festival Fringe 2014 at Assembly Roxy theater where it earned rave four and five star reviews. Best honor of all? The God Box Project has helped communities along the way, raising over $400,000 for cancer, hospice, education, family and community causes.

Audiences from around the US and the world have fallen in love with this solo performance. “Indelibly etched on my soul–so incredibly honest, heart-opening, poignant, funny…unforgettable!” “‘The God Box’ shines bright light on the quiet heroism of caregivers with humor and grace.” “A great way for mothers and daughters to bond…for anyone who holds their loved ones dear.” And as one audience member wrote “I was a hot mess…laughing, sobbing, fantastic.”

Register for Event: The God Box

Your ticket for the: The God Box