Mikel Murfi: The Man in the Woman’s Shoes / I Hear You and Rejoice 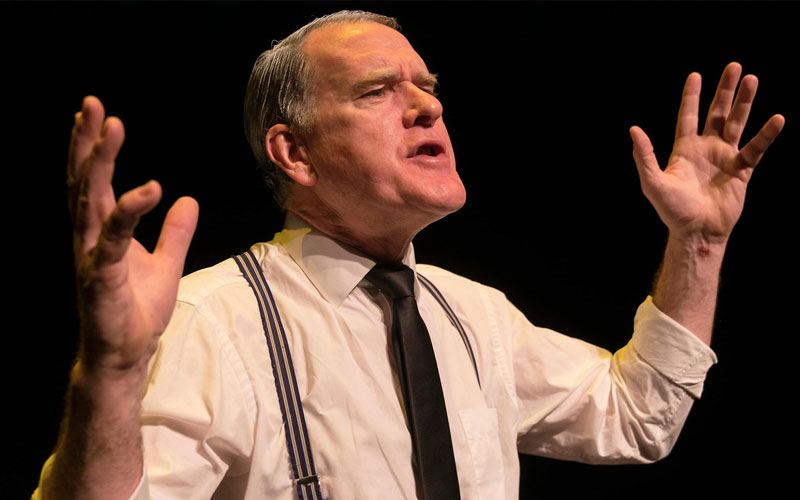 “The radio is on, the 8 o’clock news, and all the news is bad, however, not reported on any radio station, today thousands of people fell in love.”

I Hear You and Rejoice
Wed 5 December at 8pm

THE MAN IN THE WOMAN’S SHOES

A One Man Theatre Show Written and Directed by Mikel Murfi.
Commissioned by the Hawk’s Well Theatre Sligo and Sligo Arts Office as part of Bealtaine 2012.

Set in October 1978, not long after the death of Pope John Paul the First, The Man in the Woman’s Shoes is a charming and funny encounter with an ageing man who has a boundless enthusiasm for life.

“Today is beginning to feel very special and I’ve no idea why.”

Meet cobbler Pat Farnon, who wears women’s shoes to ‘break them back in’ after repairing them. We join him on his five mile walk from his wee white cottage to town and back again and get to witness the marvels and characters he meets along the way.

There’s water diviner Huby Patterson; Kitsy Rainey, the lady manager of the football team, athlete Casimir Marshall; an array of farmers all named Gilhooley; and Kemp, a man whose idea of a good time is to direct traffic wherever he may find it.

I HEAR YOU AND REJOICE

We catch up with Pat once more as he embarks on a journey he had not quite planned and finds that every twist in the road can bring its own surprises.

“A masterclass in the art of the monologue” Time Out

Register for Event: Mikel Murfi: The Man in the Woman’s Shoes / I Hear You and Rejoice

Your ticket for the: Mikel Murfi: The Man in the Woman’s Shoes / I Hear You and Rejoice

Mikel Murfi: The Man in the Woman’s Shoes / I Hear You and Rejoice