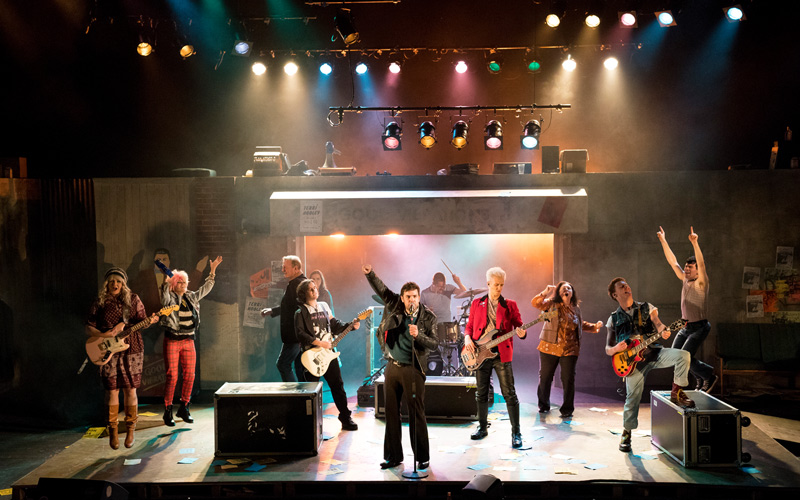 This event has been cancelled. We regret any inconvenience caused. Tickets holders: please contact the box office to arrange a refund.

A Lyric Theatre Production based on the award winning film: Good Vibrations

“New York has the haircuts, London has the trousers, but Belfast has the reason!”

Good Vibrations tells the story of Terri Hooley, a radical, rebel and music-lover in 1970s Belfast. When the conflict shuts down his city, and all his friends take sides and take up arms, Terri opens a record shop on ‘the most bombed half-mile in Europe’ and calls it Good Vibrations.  Through it he discovers a compelling voice of resistance in the city’s underground punk scene. Galvanising the young musicians into action, he becomes the unlikely leader of a motley band of kids and punks who join him in his mission to create a new community, an alternative Ulster, and to bring his city back to life.

‘Good Vibrations is as intense and big-hearted as Terri Hooley himself.’ The Irish News

It has been adapted for the stage by the same writing team behind the film biopic – Colin Carberry and Glenn Patterson – for which the pair were nominated for Outstanding Debut at the 2014 BAFTA Film awards.

“Hooley’s life story has been told on film, in his book and now on the stage – and what a night Wednesday’s opening night was. Of course, his fans were out in force but there were many Lyric regulars who admitted losing their hearts to this fascinating character” – The Irish News

“Joy may be a surprising word to describe a bunch of pogo-ing punks playing their 100-mile-an-hour music, but it’s the right word to describe the atmosphere at the Lyric for the opening night of Good Vibrations.” – Belfast Telegraph

“Sometimes you watch a piece of theatre and you just know you are witnessing something special, something everyone should see, and Good Vibrations is just that.This is exactly how theatre should leave you feeling – uplifted and wanting to punch the air in excitement. A show good for the soul.’ ★ ★ ★ ★ ★ –  Belfast Live

“Good Vibrations is one of those unmissable productions that comes along once in a blue moon and the Lyric have played a blinder opening their Autumn season with one of the most exciting shows to take to their stage in a long time.”- No More Workhorse

This event is a part of the Earagail Arts Festival – 18 days of music, theatre, visual arts, film, literature, circus & carnival on Ireland’s North West Atlantic seaboard from 9 to 26 July 2020.

Your ticket for the: Good Vibrations – CANCELLED