SOLD OUT Ceol le Chéile – The Donegal Choir of Ages 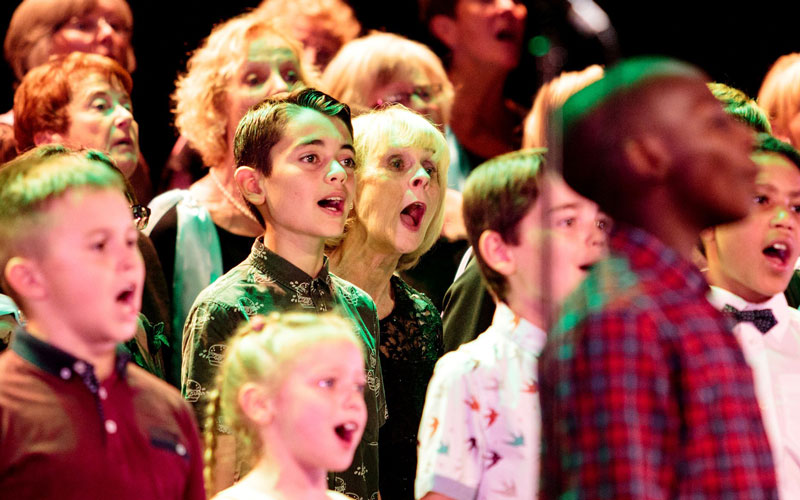 It’s just a year since Ceol le Chéile – The Donegal Choir of Ages made its debut performance with a full house at An Grianán Theatre under their charismatic Choral Director, Veronica McCarron, and Daniel O’Donnell as their special guest. Since then, the choir has performed extensively throughout the county including at Glenveagh Castle, as well as community venues in Ballyshannon, Stranorlar and Glenswilly among others.

This very special choir is an intergenerational vocal ensemble made up of over 100 older people, children and young people, male and female, from all walks of life in Donegal. An initiative of Donegal County Council’s Social Inclusion Unit, the project was conceived last year as part of the Donegal Age Friendly Programme, with the aim of promoting social inclusion and developing stronger relationships between older people, children and young people.

For this special Earagail Arts Festival concert, Ceol le Chéile will be joined by one of Donegal’s most iconic singers, Moya Brennan of Clannad, who will perform three songs from the band’s classic repertoire with the choir.

Their programme for the evening will also feature a wonderful selection of modern songs, as well as material from the Irish Tradition, including uplifting works by Rogers and Hammerstein, Bob Dylan, U2, Charles Harris and Ed Sheeran.

Register for Event: SOLD OUT Ceol le Chéile – The Donegal Choir of Ages

Your ticket for the: SOLD OUT Ceol le Chéile – The Donegal Choir of Ages

SOLD OUT Ceol le Chéile – The Donegal Choir of Ages