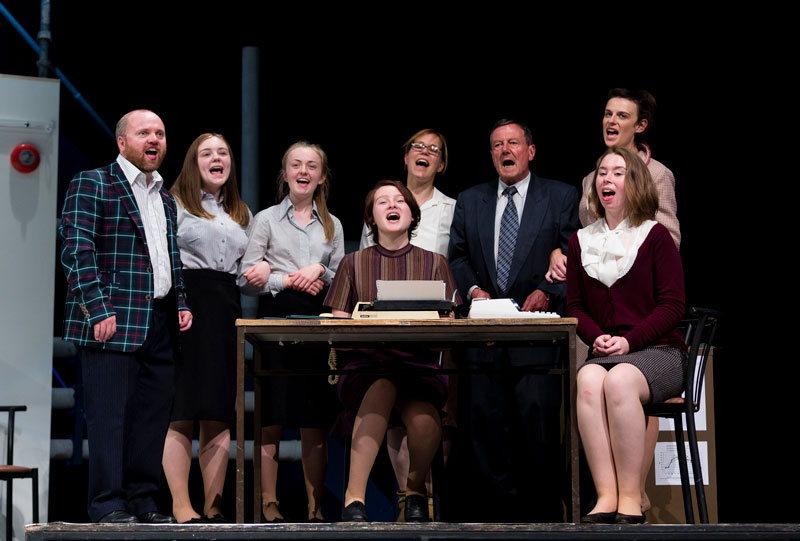 Before Pramerica, Boston Scientific and Zeus came to Donegal there was Unifi, part of the North West’s large textile industry that encompassed Fruit of the Loom in Buncrana and Adria and O’Neills in Strabane.

A million, million miles of yarn and thousands of people passed through the doors of Courtaulds Lirrelle and Unifi. For over thirty years it was a major employer in the North West in a time of rapid social change; every department a tribe and every shift a personality.

Unified takes all those personal stories and wraps them up in one big rip-roaring musical extravaganza.

As well as a large cast and chorus, Unified features country and western tunes, 1930s flappers, hip-hop and blues, movement and mime, puppets and polyester.

Writer Guy Le Jeune is Theatre-Artist-in-Residence at An Grianán Theatre, supported by the Donegal County Council and the Arts Council. His previous plays at An Grianán include On The Camel’s Hump, Fiesta and I Would Walk These Fields Again.

Unified is An Grianán Theatre production in association with the Earagail Arts Festival, and supported by the Donegal County Council and the Arts Council.

Auditions for Unified the Musical

This summer we will be co-producing a new show with the Earagail Arts Festival called Unified the Musical. Inspired by stories from the factory floor, Unified will be a colourful show with live music, singing and a large cast.

Unified the Musical – Performance dates: Thur 21 to Sat 23 July (with an option to extend to Sunday 24)

Rehearsal Schedule: to be finalised but we would envision Saturdays and possibly one weekday evening with a more intensive rehearsal period in the run up to the show.

We are looking for adults, across a range of ages, male and female (must be 16+).

Please prepare a song to give us an idea of your voice. Don’t worry if you are not a confident singer as we need chorus singers too.

IMPORTANT: If you would like to audition please call our box office on 074 912 0777 in advance to reserve a place as space is limited.

About Unified the Musical

Before Pramerica, Boston Scientific and Zeus came to Donegal there was Courtaulds-Lirelle which became UNIFI Textured Yarns, Europe Ltd. UNIFI was part of a textile industry that stretched across the North-West. Fruit of the Loom in Buncrana and Derry, Adria and O’Neills in Strabane, the shirt factories and the nylon spinners.

A million, million miles of yarn and thousands of people passed through the doors of these plants. For over thirty years, UNIFI in Letterkenny was the town’s major employer, in a time of rapid social change. Every department was a tribe and every shift had its own personality. Lives were changed, skills learned, friendships formed, partners met, and families reared on the wages.

We are going to take all those personal stories and wrap them up in one big rip-roaring, all-singing extravaganza.

UNIFIED the Musical is written by the creator of Fiesta, Guy Le Jeune; with original music written by Fionn Robinson and choreography devised by Aoife Toner. The production will be directed by An Grianán’s long-term collaborator, David Grant.

David Grant’s previous work with An Grianán includes a touring production of Frank Pig Says Hello, play readings of The Gentle Island and most recently Beneath an Irish Sky, and community theatre productions A Midsummer Night’s Dream and The O’Neill).

Your ticket for the: Unified the Musical, 2016