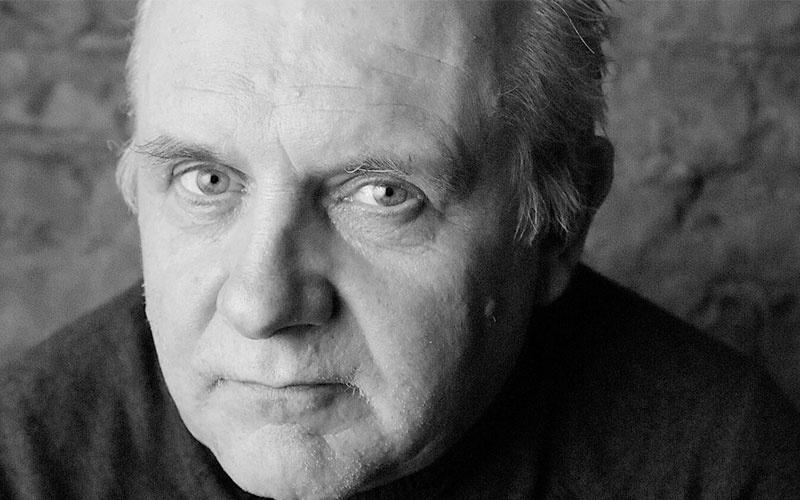 Nomad Theatre Network interview with Patrick (Pat) McCabe following their support of the publishing of his 14th upcoming novel “POGUEMAHONE” by Unbound Publishers.

Padraic McIntyre sits down for an in-depth interview with Pat McCabe discussing his upcoming novel Poguemahone, the Covid 19 crisis for the Arts and where he sees the Arts going post-pandemic.

The book, the author’s first for Unbound, is McCabe’s 14th since he burst onto the scene with The Butcher Boy (Picador) in 1992, racking up two Booker Prize nominations and a host of prizes during his career so far.

Pogeumahone – Gaelic for “kiss my arse” is billed as his biggest and most ambitious book to date, “a wild, 600-page ballad, narrated in a kind of free verse monologue by Dan Fogarty, an Irishman living in England, who is looking after his sister Una, now 70 and suffering dementia in a care home in Margate”

“The world has changed dramatically,” McCabe says of his publishing route. “I didn’t get into writing for money. Major publishing is a matter of profit and loss. I was really into the art of the thing. When I came across John Mitchinson, who was a kind of a genius editor, I thought, this is the way I want to go. He is a great editor. He was formerly Dermot Healy’s editor. He understood the book. And I just didn’t bother going anywhere else with it.”

The aforementioned Mitchinson is a writer, publisher and the co-founder of Unbound, the award-winning crowdfunding platform for books.

For McCabe being pushed in a new publishing direction by technology is emancipating: “I belong to the ‘50s as much as to the ‘60s, ‘70s or ‘80s. That is the tradition I came up, but I’m no Luddite and never was. This whole Internet explosion happened. I am very interested in it, but perhaps not very proficient. I could see its potential through my children. I find it liberating.”

While McCabe acknowledges that the pandemic has been tough on all artist, in particular performers, he is confident that this sector will bounce back and respond to the crisis in the way that artist can and have throughout the centuries.

Nomad aims to ensure that the performing arts are developed created and accessed through a new partnership approach. The purpose of this network is to further the development of performing arts in the North Midlands region, extending the parameters and introducing our audiences to regional, national and international work of a high standard.

The Nomad Network members are:

Our costume designer Anne-marie Kilfeather on why you should definitely go and see Swan Lake / Loch na hEala:

You can go to one show this year, just one, and feel unbridled satisfaction for the rest of your days.

I saw Loch na hEala last year in Belvedere’s theatre during the Dublin Theatre Festival. I didn’t know what to expect, I just heard it would be pretty special and that the entire ensemble had been living together, not just practicing moves but breaking bread together each day and generally following a holistic lifestyle in preparation for performances. I was intrigued and rightly so.

The energy of that performance remains with me.

Live music was performed by seated musicians upstage, while dancers who moved as though channelling another realm, twisted and turned, even balanced majestically on breeze blocks.

The simplicity of the colours in the costumes and set only heightened the tremendous prowess of these wonderful people as their stories unfolded. Every movement, from lightness to gut-wrenching torment was somehow translated through motion and stillness. I hardly remember the dialogue, even though it was delivered by the fantastic man that is Mikel Murfi.

I left that theatre with one thought, that I was so glad to be alive at that moment, witnessing it.

That is what great live theatre can do  – show you that there is magic in this world and all it takes is being there to know this.

Watching a documentary on the making of Bruce Springsteen’s ‘Darkness on the Edge of Town’ album, I was struck by these words as they said what I feel about the power of being at a live performance. This was how I felt when I saw him live a few years ago, but it also applies to all live experiences. I felt this way when I saw ‘Swan Lake’ too.

I’ll leave it to The Boss and Patti Scialfa to explain it better. Patti begins by describing the live experince…

Patti:
“First time I saw Bruce was in 1978. I’d never seen anything like that. It was shocking! I was surprised that you could be in such a large venue and still feel that you’re having a personal experience.”
Bruce: “When you come out there in that dark, and you make that magic, you pull something that doesn’t exist out of the air. Doesn’t exist until any given night when you’re standing there in front of your audience. Nothing exists in that space until you go, “One, two, three, four, voom!” Then you and the audience together manifest an entire world, an entire set of values, an entire way of thinking about your life and the world around you, and an entire set of possibilities. That can never be taken away.”

You only need to go to one thing in the theatre for 2018 but perhaps go on the first night as you might just want to go again.

“McIntyre finely captures the essence of this classic” Sunday Times

It’s four years since Druid Theatre Company presented their stunning DruidMurphy project in Letterkenny – featuring Tom Murphy’s plays A Whistle in The Dark and Conversations on a Homecoming – which left local theatre fans in no doubt of Murphy;s status as one of Ireland’s greatest writers.

Now there is an opportunity to see the play that many consider his masterpiece – Bailegangaire. Presented by Livin’ Dred Theatre in association with Nomad Theatre Network, the play centres around Mommo, who tells over and over again a story she never finishes of how the town came to be known as Bailegangaire, the town without laughter.

Mommo is attended by her two granddaughters, Mary and Dolly. The younger women yearn to be free of the past in order to make a new beginning, and Mary comes to believe that to do so the story of Bailegangaire has to be concluded.

Director Paraic McIntyre, who has had a long professional friendship with Tom Murphy says of it:  “the play I have been obsessed with for years.  A play set in 1984, not by chance, but because 1984 is a watermark year in the social conscience of our little country. It’s the year of Ann Lovett in Granard, the Kerry Babies, the year after the toxic abortion referendum. Murphy through his genius captures perfectly the temperature of an entire nation at this time, in this play set in a cottage kitchen in Mayo. Murphy knows and achieves in this symphony, that in order to decipher our identity whether that is national, local or personal we have to come to grips with our own story or history.  A story that is more often than not intertwined with family and a place called ‘home’. We have sometimes to deal with our historic trauma in order to become familiar with the here and now. That is all Mary, Mommo and Dolly is trying to do.”

Patricia McBride, An Grianán Theatre’s Director is the current chair of the Nomad Network which was set up in January 2006 to further the development of the performing arts and extend the parameters of regional, national and international performances available to venues and their audiences. The partnership network set out to encourage more theatre companies both national and international to tour to the regions, to produce high quality theatre and ultimately to enrich and strengthen performing arts practice in the regions and shape the future development of touring.

#BlackFriday special for comedy The Far Off Hills. 20% off all tickets for today only! http://t.co/aDYFedNXZT pic.twitter.com/dTjeQ05A73

Your ticket for the: Interview: The Butcher Boy creator Pat McCabe – Watch Now