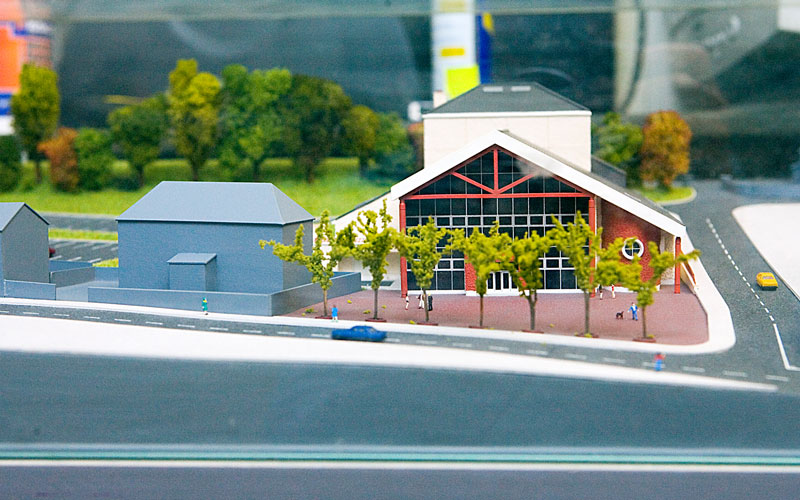 Above: Architectural scale model of An Grianán Theatre.

As we celebrate 20 years of An Grianán here is an extract from the souvenir brochure which was published to mark the official opening of the theatre in 1999. It gives a brief history of the community effort to bring An Grianán Theatre into existence:

“As one might expect for a project of this importance, the dream of having a purpose built theatre for Letterkenny and the north of County Donegal has been around a long time. It was only in the late 1980s, however, that a number of factors came together which allowed the plans to eventually reach fruition.

“In 1985 a committee was formed in Letterkenny to promote the building of a theatre and arts centre. At the same time Donegal County Council was finalising plans for a new Central Library, and following a series of meetings over the winter of 1985/6 between the local committee – soon to evolve into the Earagail Arts Group – and the County Librarian and other Council officials, the then Assistant County Manager proposed to the council that a cultural complex, involving a theatre, arts centre and central library be built on a Council-owned site. The site in question was the Rectory field, where An Grianán Theatre is now located, and which had been bought in 1983 by the Council from the Representative Church Body of the Church of Ireland as the location from the Library. This proposal was endorsed by the Council and in September 1987 fully developed and costed plans – costing just over £2M (€2.5M) for the theatre and arts centre – were submitted to the Department of the Taoiseach, the Arts Council, Bord Fáilte and the new established International Fund for Ireland. The theatre design evolved from the expressed needs of the local community, the overall approach was greatly influenced by the late Ray McAnally, Donegal’s most accomplished actor, and the detailed design of the stage and backstage areas owed much to the people involved in the local drama movement.

“The National Lottery had been established earlier in 1987, and hopes were high that through a combination of this and other sources Letterkenny would receive the necessary funding. In the event, however, the allocation in November 1987 of £200,000 (approx €254,000) left the Council in somewhat of a quandary – enough to keep the project alive, but too little to begin work.

“when a preacher comes to town first he build his congregation, then he builds his church”. Brian Friel

“Instead of celebration it was back to the drawing board. A number of options were considered, including building the complex in the designated area of the town, with a view to attracting a major developer, but nothing came of the idea. There the matter rested until May 1990, when the council decided to proceed with the plan in two phases. The first phase, would be the building of the Central Library and Arts Centre on the site of the former Literary Institute at Lower Main St, and the second would be the building of the theatre. The Central Library and Arts Centre duly went ahead, and is now in its fifth year of service. While there was some concern that putting the theatre on the back burner might mean that it would not be built for a long time, if ever, local support for the project never wavered, and amongst other initiatives, Letterkenny Chamber of Commerce became involved in trying to turn that support into practical results. Happily the picture was to improve radically, just a few years later.

“The decision by the newly formed government in 1993 to create the first ever cabinet post of Minister for Arts, Culture and the Gaeltacht, was to radically change the arts landscape of the country. Soon after taking office Michael D. Higgins, TD, the first Minister to fill the post, announced the Cultural Development Incentive Scheme, offering up to 75% funding for theatres, arts centres and museums. The Council quickly decided to seek funding under the CDIS, and commissioned new plans for a theatre at the Rectory Field, which had been enlarged by the purchase of the site fronting the Port Road. The plans were submitted to the government in February 1995, and following revisions suggested by the Department, and a visit to Letterkenny by the Minister – no stranger to Donegal as a frequent speaker at the MaGill Summer School in Glenties – Minister Higgins announced the allocation of £1.5M (approx €1.9M) to the project in February 1996.

“This was the cause of great celebration in the County, but still left a sizeable amount sum to be raised locally, by the local authorities, and the community. It was agreed that this would be borne more less equally by Donegal County, Letterkenny Urban District Council and local fund-raising. The North West Theatre Project had been formed in June 1995 form the various local drama groups and other interested parties, and it was this enterprising group which agreed to spearhead the fund-raising drive that everyone knew would be needed.

“Finalising the detailed plans, not least the cost plans, and examining the various tenders received took another two years – most of it spent cutting our cloth to suit our measure – the original cost of £3.3M (€4.2M) had to pared back to nearer £2M (€2.5M). The sense of achievement and anticipation was tangible when a large crowd of Councillors, officials and members of the North West Theatre Project gathered in the Rectory Field in April 1998 to witness the turning of the sod, and the beginning of the final phase of realising the dream of a theatre for Letterkenny and the Northwest.

“Back in 1987 two members of the Errigal Arts Group went to see Brian Friel to enlist his support. His advice was “when a preacher comes to town first he build his congregation, then he builds his church”. Looking at the programme for the first few months at An Grianán, Donegal can say it has its ‘congregation’ and its ‘church’.

“12 years in planning, 18 months in building, the dream is now a reality!”

The North West Theatre Project, made up entirely of volunteers, was central to making An Grianán Theatre a reality. As well as their success in fundraising – raising £225,000 (€285,700) in a town the size of Letterkenny was surely a stunning achievement – they inspired the local community about what a theatre can be in the life of the community.

Letterkenny: Where the Winding Swilly Flows is a new and exciting history book by local writer, actor and schoolteacher Kieran Kelly.

We are very pleased to be hosting its official launch tonight at 7.30pm. In addition to the book launch we’ll also be hosting a reprise of Kieran’s short play Echoes of Time, originally produced by An Grianán to mark Letterkenny’s 400th anniversary.  Entry is free and light refreshments will be served.

Copies of the book will be available on the night in both paperback and hardback. Only 100 copies of the hardback version have been printed so we expect those to be in demand.

Throughout the book’s 22 chapters, the entire history of the town and local region have been meticulously researched and explored, starting with the formation of the valley in the last Ice Age with theories to how the town got its name, right up to the present day.

Along the way, you will find out interesting facts about the town of Letterkenny that perhaps you never knew before. For example, did you know that Charles Stewart Parnell, Michael Palin (of Monty Python fame) and Patti Boyd (ex-wife of Beatle George Harrison) all have ancestral descent from Letterkenny? Or that at one stage, over ten thousand people were packed into the Market Square to attend a monster Land League meeting at which Michael Davitt spoke? Or that Donegal won their first Ulster Junior Championship title in Glencar?

As well as meeting many colourful characters who helped shape and define what Letterkenny would eventually become, the book explores ancient Gaelic battles along the banks of the River Swilly, the formation of the modern town in the Ulster Plantation, the various families of the Ascendancy Big Houses, the rise of local government, the building of the Cathedral and various educational establishments, the local impact of World War 1, the arrival of the Port and Railway systems, twentieth century industrial and commercial development as well as in-depth history of various sports and drama clubs important in the social integration of the town’s inhabitants.

Complemented by an assortment of maps, graphs and photos, this bright and colourful publication also hosts new illustrations by local artist John Ruddy that cover these key events important in the town’s history.

Echoes of Time is Kieran’s play that looks back at Letterkenny’s plantation past. It toured local primary schools with great success in 2011.  Original cast members Nora Kavanagh and Eoghan Mac Giolla Bhride are joined by youth theatre member Patrick Quinn soon to be seen in Bugsy Malone. Like the book it contains many snippets about Letterkenny that you probably haven’t heard before.

Tues 28 October at 7.30pm. Admission is free. Light refreshments will be served.

Your ticket for the: Book Launch: Kieran Kelly – Letterkenny: Where the Winding Swilly Flows