Druid Theatre’s award-winning production of Waiting for Godot embarks on an extensive Irish and international tour in 2018 and will come to An Grianán for three nights only in March.

On a bare road in the middle of nowhere, two world-weary friends await the arrival of the mysterious Godot. While waiting, they speculate, bicker, joke and ponder life’s greater questions. As dusk begins to fall, two figures appear on the horizon.

Regarded as one of the most significant plays of the twentieth century, Waiting for Godot by Samuel Beckett is a masterpiece that draws endless interpretations and Druid’s production has won acclaim from audiences and critics alike, and multiple Irish Times Irish Theatre Awards.

Marty Rea as Vladimir and Aaron Monaghan as Estragon in Druid’s production of Waiting for Godot by Samuel Beckett directed by Garry Hynes. Photo Matthew Thompson.jpg

Druid’s interpretation of this Beckett masterpiece premiered at the 2016 Galway International Arts Festival, captivating both audiences and critics alike. There wasn’t a ticket to be had for the subsequent Unusual Rural Tour, which played outdoors in Glencree, Inis Meáin and the Céide Fields. The sell-out production earlier this year had a month-long run at the Abbey Theatre in April prior to heading to Spoleto Festival USA in June.

“Our 2016 Unusual Rural Tour showed us just how much of an appetite there is for this production so it’s great to take it to so many corners of the country, and internationally, in 2018.” said Artistic Director, Garry Hynes. “It’s also fantastic to continue working on this extraordinary show with members of our Ensemble and creative team who have shaped something very special.”

Aaron Monaghan as Estragon, Garrett Lombard as Lucky and Marty Rea as Vladimir in Druid’s production of Waiting for Godot by Samuel Beckett directed by Garry Hynes. Photo Matthew Thompson.

Druid actors are at the centre of the company’s creativity and a permanent Druid Ensemble was announced in 2013. The ensemble meet throughout the year and feed into Druid’s artistic programme. Waiting for Godot stemmed from the Druid ensemble and is testament to the shared commitment of both the company and the ensemble in investigating new creative possibilities.

Druid first performed at An Grianán with The Beauty Queen of Leenane in 2000.
Other productions performed here include DruidSynge (2004), The year of the Hiker (2006), The Cripple of Inishmaan (2008), The Gigli Concert (2009), DruidMurphy (2013) and most recently DruidShakespeare (2015): Richard II, Henry IV (Part One), Henry IV (Part Two) and Henry V in a new adaptation by Mark O’Rowe. 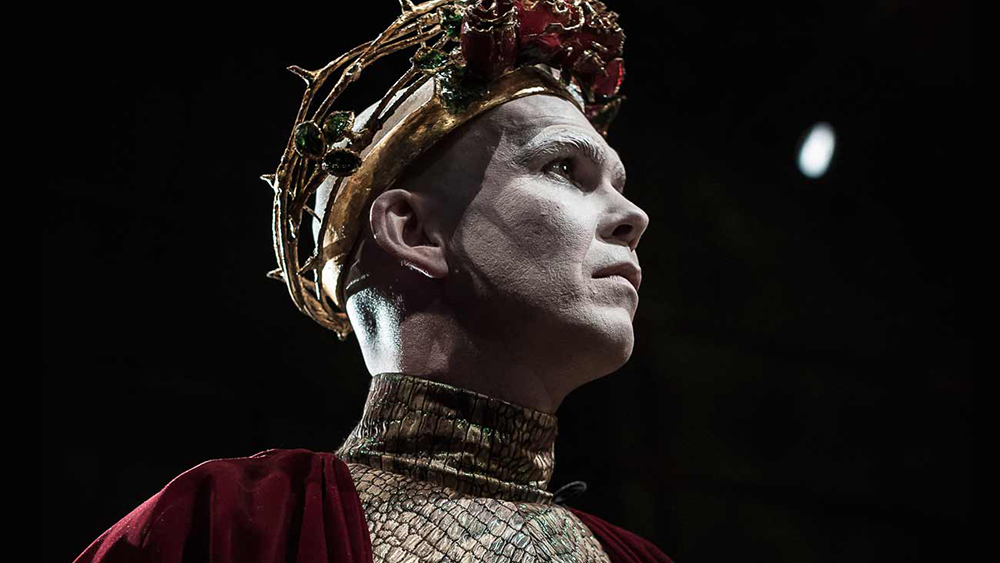 Druid began as a bold idea: to create Ireland’s first professional theatre company outside of Dublin. There were few resources with which to build a theatre company in the west of Ireland in 1975, but, through sheer dedication, and with the support of the Galway community, founders Garry Hynes, Marie Mullen and Mick Lally made this bold idea a reality. That reality has since become an international success story of extraordinary dimensions.

NUIG graduates, Garry Hynes, Marie Mullen and Mick Lally founded Druid in the mid 1970s and rehearsed in various buildings around Galway – the Jesuit Hall, The Fo’castle Hotel – before they found a home on Druid Lane. It was in that first year that Druid produced Synge’s The Playboy of the Western World and in it, found a playwright they would go on to explore and find success with at home and abroad.

The company’s first won success outside of Ireland was the Edinburgh Fringe Festival and Druid quickly gained an international reputation with productions such as At the Black Pig’s Dyke (1992), Conversations on a Homecoming (1985), and Bailegangaire (1985) featuring Siobhan McKenna in one of her finest dramatic performances.

In 1996 Druid premièred Martin McDonagh’s debut work The Beauty Queen of Leenane, in a co-production with the Royal Court Theatre. It opened in Galway and played in London, Sydney, Dublin, and on Broadway, where the production won four Tony Awards, including Best Director for Garry Hynes, the first woman to win an award for directing in the history of the Tony’s.

To this day, while Druid works with a core group of actors, designers and production crew on a consistent basis, at its heart is the working relationship between Garry Hynes and Marie Mullen, one of the most successful and significant actor-director relationships of the modern theatre. Druid founder and actor, Mick Lally, passed away in August 2010 and up until that time had been one of Druid’s core group of actors. 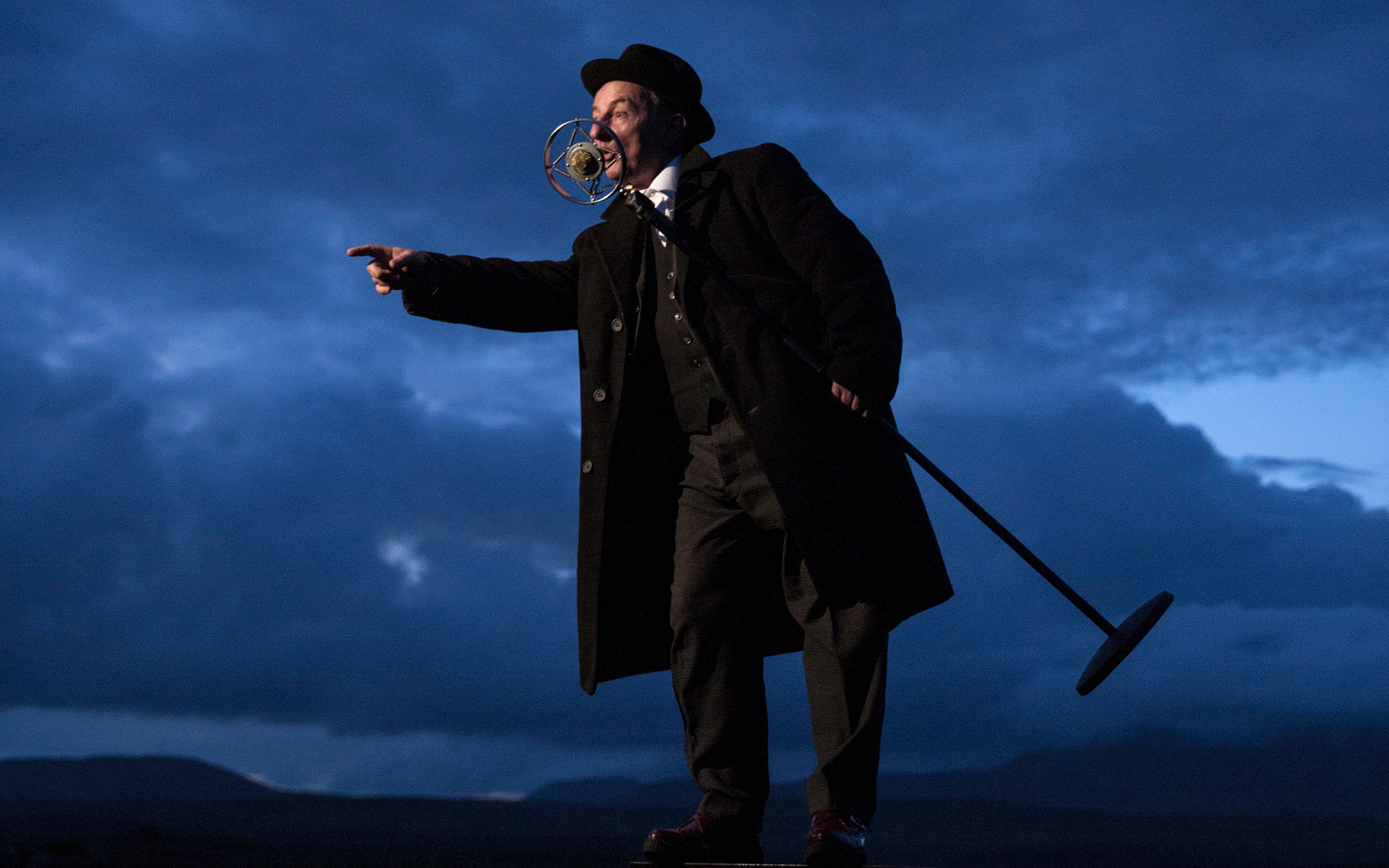 Little John Nee is a performer we’ve enjoyed a long, creative relationship with. In 2010/ 2011 he was our theatre artist in residence leading many workshops, performing shows, working on the book of his three ‘Donegal’ plays The Derry Boat, The Mental and Rural Electric, and creating a daily haiku. Subsequent to this work he recorded an album of songs with the Highly Strung Caledonian Orchestra.

We are delighted to be able to support the making of his latest play, Radio Rosario, which is part of the Dublin Theatre Festival this September. Set in Galway city, in the very near future in Radio Rosario John plays Valve Hegarty, a man who sings audio jingles to pay the rent; a drudgery that weighs heavily on him. He has a hankering for something of substance and is drawn to the beauty of 20th-century valve radios. A chance meeting in Clifden leads him to the site of the Marconi Station where a soundscape of ghostly broadcasts begins. Meanwhile, Rosario is… well, Rosario is Rosario.

In Radio Rosario, Little John Nee brings his musical storytelling on another step with long-time collaborator and creator Laura Sheeran, who we last saw on our stage with Little John in The Mental, she also performed in the foyer at the Crash Cabaret with her band Nanu Nanu,  and a multi-award winning team. We very much hope to present Radio Rosario at An Grianán Theatre at some point during 2018.

Something big is happening…

“Something big is happening in Letterkenny this summer and we want to make sure you know about it: DruidShakespeare tours to An Grianán from 3rd – 6th June. The production is not only one of our most ambitious undertakings ever, it also marks our fortieth year making theatre!

Above: Marty Rea who appeared in DruidMurphy at An Grianán (photo by Catherine Ashmore) plays Richard II in DruidShakespeare (photo by Matthew Thompson).

“Druid has toured the length and breadth of the country, and all over the world. Our relationship with Donegal goes back to 1983 when we brought M.J. Molloy’s Wood of the Whispering to Ballyshannon and Ballybofey. Over the next twenty years we performed regularly throughout the county, from Buncrana to Aranmore, and in recent years, An Grianán Theatre in Letterkenny has provided us with a home away from home. In 2013 we staged DruidMurphy – Plays by Tom Murphy at An Grianán, and now DruidShakespeare heads north to celebrate the mastery of the bard in our fortieth year.

“I hope you will join us for this epic theatrical event, and help us celebrate forty fantastic years producing and touring theatre.”

View all news for DruidShakespeare.

DruidShakespeare: What audiences have been saying

It had its official opening  last Saturday night in the Mick Lally Theatre and here’s a little sample of what audiences have been saying about it.

Still getting goosebumps from the Battle of Shrewbury scene in #DruidShakespeare, especially Derbhle Crotty. #BadAss

Blown away by @DruidTheatre #DruidShakespeare. Massive. Magic. Utterly compelling. In awe of you all! Do go see it. https://t.co/hTIlrzNvH1

So it wasn’t all a crazy, fantastic dream with muck, rain and blood… #DruidShakespeare pic.twitter.com/orqc3HGODD

And it has to be said that Marty Rea is phenomenal as Richard 11 @DruidTheatre #DruidShakespeare — alice kennelly (@aliceken) May 17, 2015

Not long back from #DruidShakespeare and have been told I need to stop talking about it. #OverStimulated #GoSee — Róisín Stack (@rostack) May 16, 2015

@CraigFlaherty @garryhynes many many thanks to you and all the team for that #DruidShakespeare experience.

What and amazing experience at the opening of @DruidTheatre Shakespeare. Total theatrical experience. #galway #DruidShakespeare #druid — Leon Butler (@leonbutler) May 16, 2015

DruidShakespeare comes to An Grianán Theatre this June. Buy tickets now or find out more about the production here.

View all news for DruidShakespeare.

Check out these behind the scenes images from Druid Theatre as they continue rehearsals for their epic DruidShakespeare project which they will tour to Donegal this June.

DruidShakespeare condenses four action-packed plays into one thrilling drama with an exceptional cast, live music and a rousing parade of characters including one of Shakespeare’s greatest comic creations, Falstaff.

You can find out more about the production here.

As announced at the official Druid press launch on Friday we are thrilled to be one of the venues that DruidShakepeare will visit on their Irish and American tour.

Druid are describing this project as their  “most ambitious ever undertaking” and it is a fitting marker for the company’s fortieth year making theatre.

With an ensemble cast of thirteen actors, this major new theatre event will tour to Letterkenny, Sligo, Castlebar, Limerick, Skibereen, New York and Kilkenny over the summer months.

Casting elements were also announced by Artistic Director Garry Hynes: “Acting is first and foremost an act of imagination, both on the part of the actors and the audience. That act of imagination transcends nationality, character, geography and background and we see no reason why it shouldn’t transcend gender too. Accordingly, our actors have been cast without regard to their own gender. For example, the three kings – Richard II, Henry IV and Henry V – are played by one male and two female actors.”

DruidShakespeare is an exploration of English history through an Irish lens. As Shakespeare was writing Richard II, Henry IV (Pts. 1 & 2), and Henry V, English forces were being sent to Ireland to quell rebellions and these expeditions are referred to throughout the plays.

Adapted by one of Ireland’s most exciting writers, Mark O’Rowe, DruidShakespeare distills the narratives of these four works into a unified dramatic action.

Shakespeare’s language has been preserved as has the chronology of the plays but O’Rowe’s adaptation removes ancillary characters and streamlines the narrative to harness the drama of these epic works.

The ensemble cast features many familiar faces to our patrons who have attended previous Druid productions at An Grianán.

Your ticket for the: DruidShakespeare now open for booking