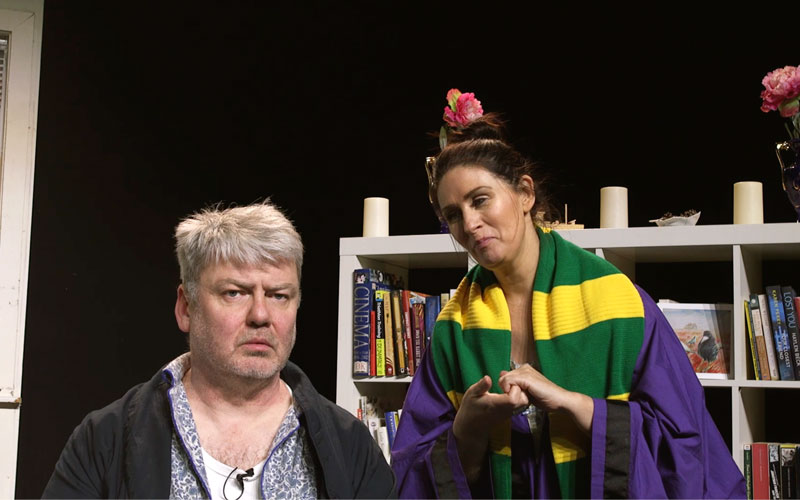 Mass in the time of Covid – Packie is unimpressed when his wife Kathleen starts to deliver mass at the breakfast table. Charlie Bonner and Cathleen Bradley star in the third of our Little Acorns commissions. Online Mass was written by Seamus McDermott and directed by Karen Quinn.

Commissioned by An Grianán Theatre

Recorded at An Grianán Theatre in April 2021. All rights reserved.

Seamus McDermott lives in Convoy. This is Seamus’ first play. At school Seamus struggled with writing, reading and spelling. This resulted in a lack of confidence in his creative ability. Two years ago at the age of fifty-two Seamus completed a part-time creative writing course facilitated by Avril Meehan in Lifford Court House. It was here he discovered a passion for writing. Seamus’ main interest is in poetry and he has been shortlisted in the Allingham Arts Poetry Competition 2020, published in Little Gems magazine’s Spring and Winter editions, Pendemic (online), Stories From The Waterside (online), and had a video-poem selected for screening at Reel Poetry / Houston Texas 2021 Film Festival.

At the end of January 2021 we put a call out for writers to submit short plays, 5 to 10 minutes long, that we could film and share on our social media platforms. We had over 50 plays submitted and chose 6 in all to turn into short films. We’ve been filming and editing them throughout April and May and will be sharing them over the next few weeks.

Cast announced for Beneath An Irish Sky

We are pleased to announce our cast for this dramatic reading of Kieran Kelly’s new play.

This March as part of our season of events to commemorate the 1916 Rising we will be holding a dramatic reading of a new play by local author and historian Kieran Kelly. Beneath an Irish Sky looks at the events of 1916 from a Donegal perspective. It is a fictionalised account of one man’s journey through those those turbulent times, questioning what made him pick up a gun to fight for his country and how one moment in his youth affected the rest of his life.

A professional actor with 25 years experience, Charlie Bonner most recently appeared at An Grianán in the acclaimed Livin’ Dred production The Kings of the Kilburn High Road and in last year’s Lyric Theatre production of the Brian Friel classic Dancing at Lughnasa.

From St Johnson, Patrick McBrearty made his professional debut in our production of Frank Pig Says Hello also with director David Grant. He is currently appearing in Sole Purpose’s Blinkered and will soon appear in Belfast Tempest, a huge Shakespearean production which will feature a cast of 200 performers.

Jack Quinn has had a long and varied career and has appeared many times in An Grianán productions including our very first touring show, Brian Friel’s Translations in 1999. He also appeared in our Irish Times Theatre award winning production  of Dancing at Lughnasa in 2002.

Orla Carlin’s previous roles with An Grianán include Fiesta, Brian Friel’s Aristocrats. She has also performed with the Letterkenny Pantomime Society and in the Letterkenny Music & Drama Group’s Don’t Tell the Wife.

Jason Daly appeared in our production of The Freedom on the City in 2013 before going to Dublin to study at the Lir Academy of Performing Arts. He also had one of the principal roles in our original production of Fiesta in 2014.

Hugh Carr and Tomás Barriscale are both graduates of our Youth Theatre programme. Tomás is currently studying science in Cork while Hugh is getting ready for his Leaving Cert and planning to study theatre and acting at college.

A look back at the original Kings

This Wednesday 17th & Thursday 18th February we welcome Livin’ Dred Theatre’s production of Jimmy Murphy’s emigration drama The Kings of the Kilburn High Road. But back in the summer of 2000, not long after An Grianán first opened its doors,  we were fortunate to host the original Red Kettle Theatre production of this play.

“it’s a very funny play. Every character has their own story to tell – the dreamers are still talking about coming home while the realists know that will not happen.” Charlie Bonner

Back then the Celtic Tiger was in full roar and the emigration of whole generations of young Irish people was seemingly becoming a thing of the past. How times have changed! And how relevant The Kings of the Kilburn High Road remains.

Our ticket sales rocketed when an elderly Australian nun rang in to Highland Radio to complain vociferously about the content and strong language. Audience member Laurence Blake takes up the story:

‘The last time I saw the show it was a very moving experience and not without some controversy. I found the show very real, relevant and upsetting for it brought to life many stories that I had heard from local workmen who had spent years working as navvies throughout the UK.

“It’s hard to believe that was 16 years ago and some commentators actually argued that these events never took place. I ended up on a “head to head” with a visiting nun on local radio who argued that a land of saints and scholars could never have produced such depraved, broken and drunken men. Sadly nothing could be further from the truth and the depiction as outlined in the play was very real and all too true to life.  But be sure to go and see the show for yourself and make up your own mind.

“In more recent times and again as a result of recession, hard times and unemployment, many of our skilled and unskilled workers were forced to emigrate once more. However most of these ended up not just in the UK but in far flung corners of the world and especially Australia. From what I hear from the returning Aussie workers, especially those on building sites and the mines–events and happenings as portrayed in the Kings of the Kilburn High Road are just as applicable today in such areas as Perth, Sydney, The Northern Territory or Queensland.”

This revival features a fantastic cast including well known Donegal actor Charlie Bonner. Here he is talking about the play in the Donegal News: “They were a group of six…There is a lot of history between them so, when they start drinking, there’s singing, dancing and a lot of stories start to come out. There is also a lot of resentment there – it’s a very funny play. Every character has their own story to tell – the dreamers are still talking about coming home while the realists know that will not happen.”

Places like Kilburn may have changed out of all recognition as Jimmy Murphy describes in this article in the Irish Times: “they’re all gone now, the Kilburn High Road isn’t what it was and you’ll be hard pushed to see a Paddy these days, sober or drunk, the length and breadth of it. All that’s left are their stories, and for that we’re all the richer”.

Meet the Kings of the Kilburn High Road

The Kings of the Kilburn High Road is our first drama of 2016 and what a way to kick off a season of outstanding plays here at An Grianán.

Director Padraic McIntyre and his company Livin’ Dred Theatre have assembled an stellar cast for this powerful Irish drama.

The Kings of the Kilburn High Road tells the story of group of young men who leave 1970s Ireland in the hope of making their fortunes in England.  Twenty-five years later only one, Jackie Flavin, makes it home, but does so in a coffin.  The Kings of the Kilburn High Road takes place on the day the winners and losers of the group meet up to drink to Jackie Flavin’s memory and looks at their lives, lost dreams and their place in the new Ireland.

Fresh from his excellent turn as Michael in the Lyric’s recent production of Dancing at Lughnasa, we are pleased to welcome back local actor Charlie Bonner to An Grianán so soon. A regular with the Abbey Theatre appearing in some 14 different productions since 1995 including the Friel plays Philadelphia, Here I Come! and Living Quarters, Charlie worked with us on our Rediscovering Friel project for the 2013 Earagail Arts Festival. He also recently appeared in RTE’s 1916 drama Rebellion.

Seamus O’Rourke is a writer, director and actor and his comedy drama Ride On! was performed at An Grianán in 2011, also from Livin’ Dred. He has been heav­ily involved in the ama­teur drama scene for more than twenty years, fea­tur­ing in the All Ire­land Drama finals in Athlone on fif­teen occa­sions.  In the finals, he has won: RTE Best Direc­tor in 2005 (Stolen Child by Yvonne Quinn & Deirdre Ní Chaoimh), RTE Best Actor in 2010 (for John in Con­nor McPherson’s Shin­ing City), RTE Best Sup­port­ing Actor in 2011 (Pato in the Beauty Queen of Leenane by Mar­tin McDon­agh), as well as being nom­i­nated for direc­tion and act­ing on eight other occasions.

One of Ireland’s best known actors, showbiz is in Phelim Drew’s blood – he is the son of the Dubliners’ Ronnie Drew. Recent roles include Billy in the hit musical Once at the Olympia. Phelim made his film debut in Oscar winning hit My Left Foot and has also appeared in movies such as The Commitments. Appearances at An Grianán include a memorable turn in the Abbey Theatre’s The Seafarer and Decadent Theatre’s Port Authority.

Arthur Riordan is a founder member of Rough Magic Theatre Co and has appeared in many of their productions, including Peer Gynt, Improbable Frequency, Solemn Mass for a Full Moon in Summer, and more. He has also worked with the Abbey & Peacock Theatres, Gaiety Theatre, Corcadorca, Pan Pan, Druid, The Corn Exchange, Bedrock Productions, Red Kettle, Fishamble, Project, Bewleys Café Theatre and many others.  Arthur has also written several plays including The Train, Improbable Frequency, Peer Gynt (a new adaptation) and The Emergency Session, all for Rough Magic; Slattery’s Sago Saga (adapted from the unfinished Flann O’Brien novel) for the Performance Corporation; Shooting Gallery (co-written with Des Bishop for Bedrock Productions); Rap Eire, (also with Des Bishop for Bickerstaffe); and Love Me?! for the Corn Exchange.

Originally from Cork, Malcolm Adams trained as an actor in The Actor’s Space in New York.  He was in the original cast of John Breen’s brilliant rugby drama Alone in Stands, touring with it for three years including stints in London’s West End. He also toured in Marie Jones’ Stones in his Pockets, performing in it more than 300 times in the West End and on a 40 city tour of the UK. Between 2005 and 2010 Malcolm was nominated four times for an Irish Times Theatre Award, once for Best Actor (for Arthur Riordan’s Slattery’s Sago Saga, Performance Corporation) and three for Best Supporting Actor (Belfry, Livin’ Dred; The Taming of the Shrew, Rough Magic; and Only an Apple, The Abbey Theatre).

Your ticket for the: Little Acorns – Online Mass WATCH NOW