Want to join our youth theatre? 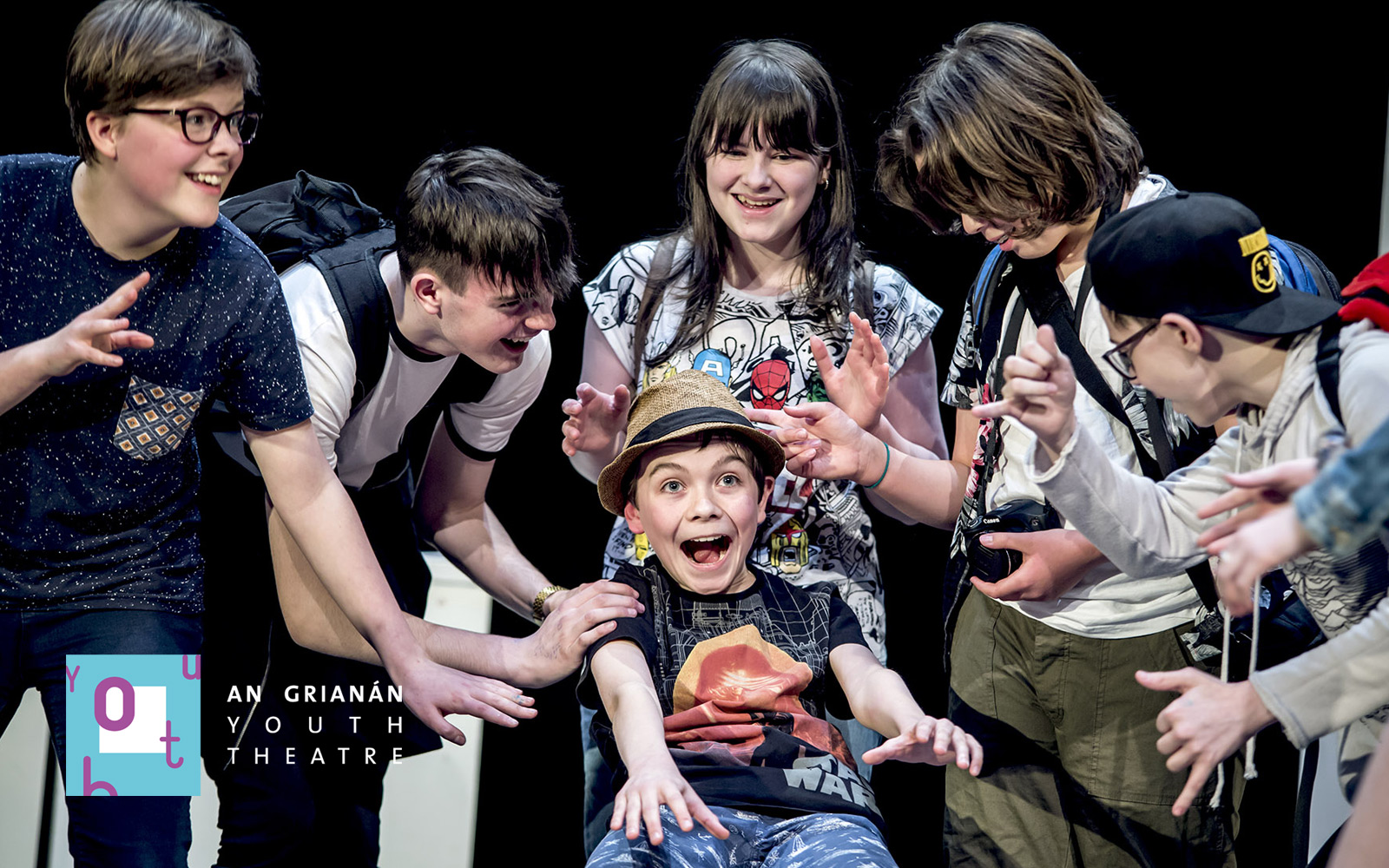 We’ll be holding a free Taster workshop on Wed 28 August to recruit prospective members for our senior youth theatre. This is a great way to try out youth theatre and see if it’s for you. The workshop is open to young people ages 14 to 21.

The bad news! While we will do our best to accommodate everyone who attends the taster workshop, we only have a limited number of places available in our youth theatre so we cannot guarantee that everyone who attends the Taster workshop will subsequently be offered a place in the youth theatre. Unsuccessful candidates will be added to our waiting list in case of any cancellations.

What does our youth theatre do?

We run weekly classes for children and young people ages 7 to 21. Our senior classes are suitable for ages 14 to 21 and are held on Wednesday evenings during term time.

We believe strongly in learning through creative play and our classes are made up of an inventive mix of drama games and acting exercises.

You’ll be encouraged to improvise and creatively engage with the material provided by our tutors, sometimes from prepared scripts and sometimes from work devised entirely by the students.

Being a member of a youth theare allows opportunities for both creative and personal development through acting, drama and other performance techniques. Students will learn more about their own voices and movements as well as observing others through play and theatre games. Drama can also help to build confidence and to develop communication and co-operation skills. 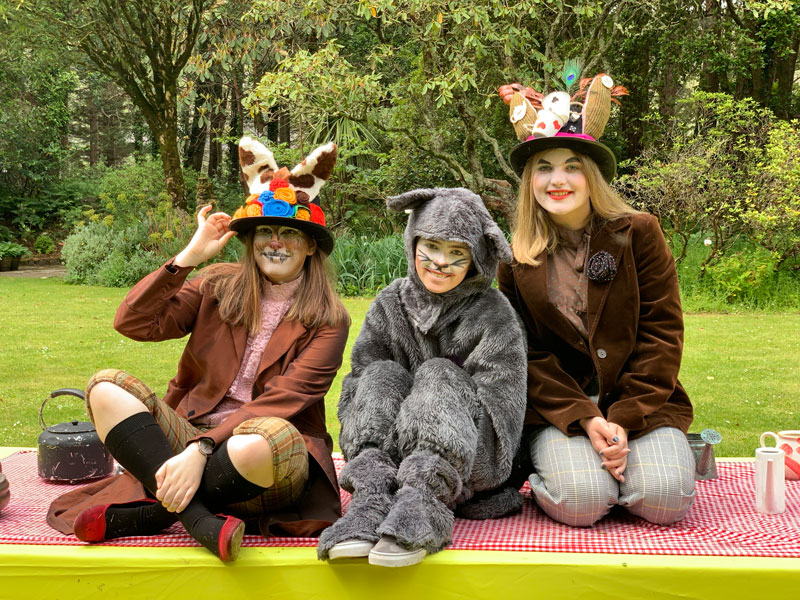 Being a member of An Grianán Youth Theatre offers you the added bonus of learning theatre skills and stage craft in a professional theatre environment with access to highly trained facilitators, technical crew and equipment.

With an emphasis on performance, you’ll be offered an insight into many aspects of professional theatre production. Our youth theatre is also an ideal stepping stone for those of you wishing to go on to study acting, theatre and performing arts at third level. 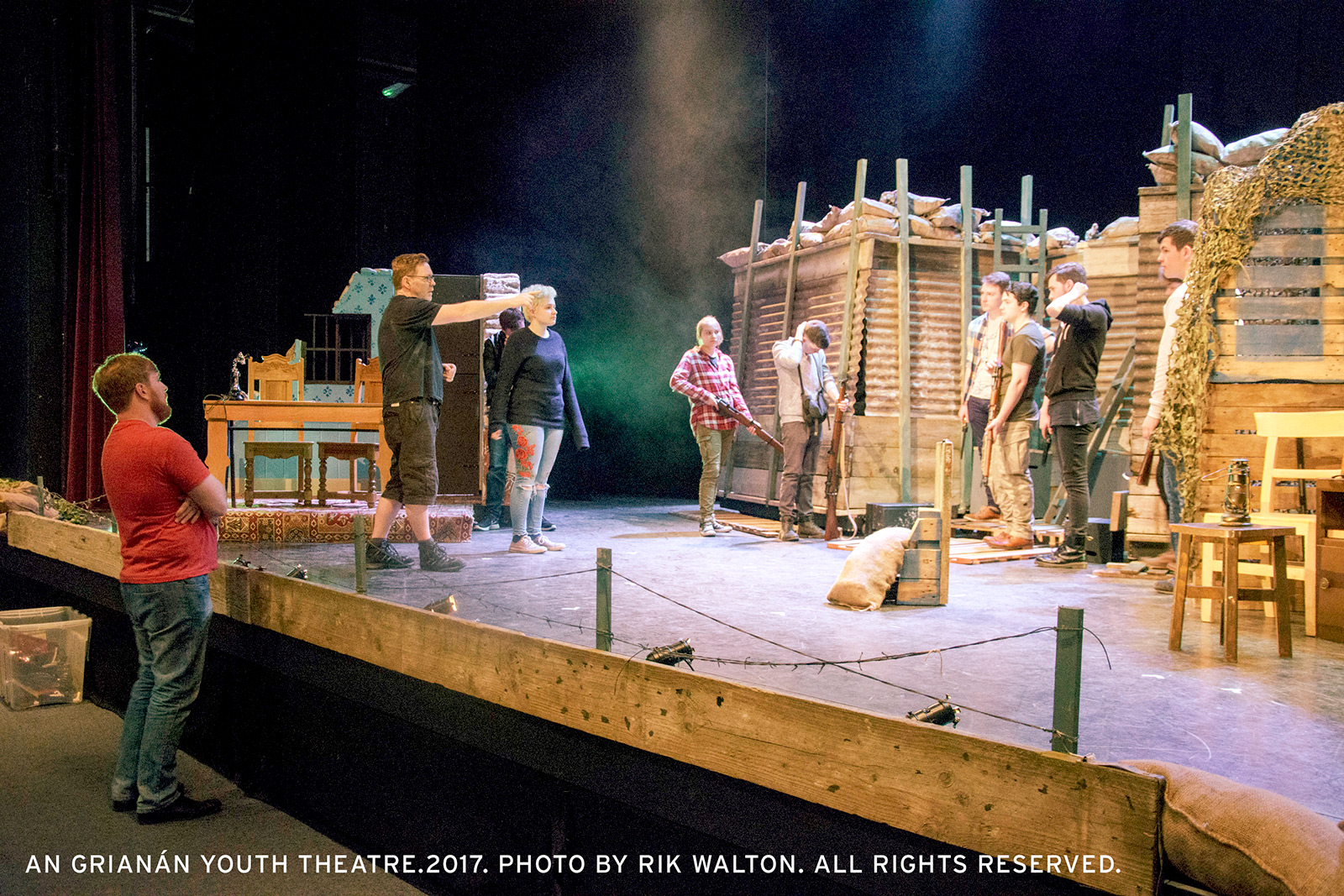 Our recent projects include Blackadder Goes Forth, 2017, The Wolves of Willoughby Chase, 2018, The Selkie, 2018, Alice’s Adventures in Wonderland (site specific performance at Glenveagh National Park), 2019. Plans for this year include working with a guest tutor from Fidget Feet Theatre for their upcoming production Bingo Wings.

Sat 2 December
Due to An Grianán’s packed schedule this weekend we have had to temporarily relocate this Saturday’s drama classes to Pinehill Studios on the Mountaintop. Class times remain the same.

Sat 9 December
We are back in the theatre for the final class of the year. This will be our end of course showcase.
Can all students please be at the theatre for 10.30am.
Showcase: 12.30pm in the auditorium.

Reminder: no youth theatre or drama classes classes over Halloween.

We’re taking a break for Halloween so there will no drama classes on Sat 28 Oct, Wed 1 Nov and Sat 4 Nov.

We were delighted to welcome some of our favourite people – Jym and Chantal from Fidget Feet and Little John Nee to An Grianán for a week’s residency in April as they worked on their brand new show Bingo Wings which is due to make its debut in 2018.

They spend the week visiting day centres, swapping stories and playing bingo – not a bad way to spend a week! They also introduced members of our youth theatre to the joys of the bingo!

An Grianán Youth Theatre members Amybeth, Eoin, Ryan, Jasper and Laramie with Chantal McCormick from Fidget Feet at a workshop in April 2017. The workshop is part of the research work for a brand new show called Bingo Wings which Fidget Feet are making with Little John Nee. Watch out for it in 2018.

Little John performing at one of the day centres they visited as part of the research week for Bingo Wings.

Another entry in the 100 Archive: Youth Theatre identity

In addition to our gift voucher wallets we learned today that our recently commissioned An Grianán Youth Theatre Logo has also been selected for inclusion in the 100 Archive of Irish graphic design.

Inspired by our main logo which is a typographic visualisation of a performer on stage, our youth theatre logo replaces the performer ‘G’ with an animated ‘Youth’ which breaks out of the normal confines of the stage.

On the left is An Grianán Theatre’s main logo designed by Carton LeVert and on the right is  our new Youth Theatre logo by OD Design.

Dan and Crona of OD Design consulted directly with members of our youth theatre in the creation of the new identity which like our main logo is variable and available in different colours.

On Saturday 29 October four of our youth theatre members travelled to Arnold’s Hotel in Dunfanaghy with tutor Nora Kavanagh to provide an afternoon of Halloween entertainment.

A big thank you to Angel Humm, Sarah Masterson, Adam Boyle and Kai McHugh who kindly donated their performance fee to An Grianán Youth Theatre.

On Friday 28 October members of An Grianán Youth Theatre presented some spooky pre-show entertainment as part of an evening of Gothic themed drama and music which included the feature event Female Gothic from Dyad Productions.

The Donegal Chamber Orchestra performing haunting music for Halloween at An Grianán Theatre on Fri 28 Oct 2016.

The youth theatre ensemble also performed as an assortment of druids, ghouls and zombies.

The Donegal Chamber Orchestra performed a wonderful selection of music including Assorted Horrors by Derek Ball, Grieg’s Aase’s Death from Peer Gynt and the truly spine tingling theme from Hitchcock’s Psycho by Bernard Hermann. A huge thank you to Victor Yélamo for the excellent choice of music.

An Grianán Youth Theatre member Laramie Carey recites Emily Dickinson’s I Felt A Funeral, In My Brain at An Grianán Theatre on Fri 28 Oct 2016.

The Donegal Chamber Orchestra performing haunting music for Halloween at An Grianán Theatre on Fri 28 Oct 2016.

An Grianán Youth Theatre members Angel Humm and Laramie Carey who performed at An Grianán Theatre on Fri 28 Oct 2016 in Halloween Gothic.

Huge congratulations to Amybeth McNulty who has been cast in the lead role of the CBC/Netflix’s adaptation of Anne of Green Gables.

Amybeth is a member of our youth theatre and has attended classes and workshops at An Grianán for many years including our Performing Arts Summer School and the Ballet Ireland Summer School.

We are all absolutely thrilled for her and can’t wait to see the show!

The evening begins from 7pm with a selection of suitably spooky music in the foyer from members of the Donegal Chamber Orchestra.

Senior members of An Grianán Youth Theatre will perform extracts from Frankenstein as well as classics from Edgar Allan Poe and Emily Dickenson to get audiences in the mood for the feature event of the evening: Female Gothic.

Starting at 8pm in the auditorium, Female Gothic is an acclaimed theatre show from Olivier Award winning director Guy Masterson and performed by Rebecca Vaughan of Austen’s Women fame.

An artist, gripped by the clutching fingers of a dead past; a scientist, defying nature in the dark realm of the senses; an expectant father, driven mad by creeping shadows…

In the unquiet darkness between life and death, a lone, haunted woman tells chilling tales of the macabre and terrifying, illuminating the curious frailties of human nature.

Female Gothic is presented by Dyad Productions, a UK based theatre that creates, produces and tours innovative yet classic theatre with a contemporary relevance. With emphasis on new writing and radical interpretations of existing text, Dyad’s acclaimed shows include Austen’s Women, Jane Eyre: An Autobiography and The Unremarkable Death of Marilyn Monroe

The schedule for the evening is:

From 7pm in the bar & foyer (free admission)

The Creature’s Speech from Mary Shelley’s Frankenstein, The Conqueror Worm and Annabel Lee by Edgar Allan Poe, I Felt a Funeral in My Brain by Emily Dickenson, and other surprises.

8pm in the auditorium – admission €15/€12 Book now!
Dyad Productions present
Female Gothic
running time: 75 minutes
NB: Running time for all the evening’s events will be a little over two hours give or take a scare or two!

Your ticket for the: Assorted Horrors: Halloween Gothic at An Grianán Theatre