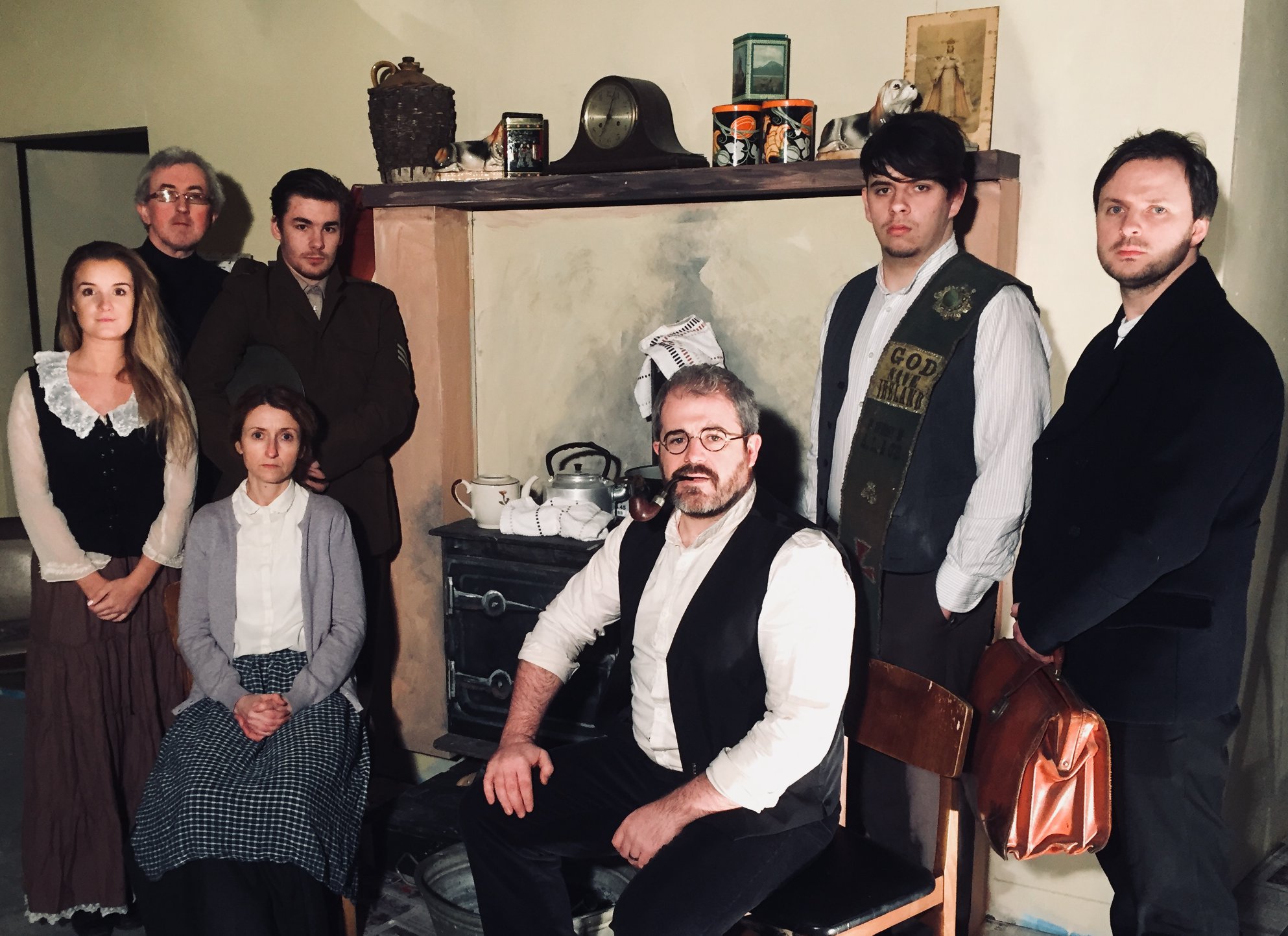 Letterkenny Music & Drama Group are delighted to be presenting a brand new play for their drama festival production this year. “Beneath an Irish Sky” will receive its premiere in An Grianán Theatre on Tuesday 13th February 2018 prior to competing on the demanding Drama Festival Circuit.

Inspired by archive reports and eyewitness testimonies, “Beneath An Irish Sky” is written by Kieran Kelly and looks at the events of the ‘decade of change’ from a Donegal perspective. Set in the town of Letterkenny between the years 1914-1924, it tells the fictionalised account of one man’s journey through those turbulent times, questioning what made him pick up a gun to fight for his country.

Originally written as a dramatic reading as part of An Grianán Theatre’s 1916 commemorations two years ago, the overwhelmingly positive response to that performance prompted Kieran to return to it and adapt it for a full production. “When it was first performed as a reading in 2016, it concerned an elderly man being interviewed in 1966 as he looked back on the events that affected him as a young man,” said Kieran. “However, when it came to adapt it for a full production, I found it more interesting to focus on the actual events in the past to drive the story forward rather than a piece of retrospection and so it is now set firmly between 1914 and 1924.”

Direction is in the sure hands of Pluincéad O’Fearraigh who is very much looking forward to producing a brand-new play for the Letterkenny audience and beyond. “I’m thrilled and delighted to be directing and producing this thought provoking and intriguing play by Kieran for its world premiere in An Grianán Theatre and then on the 3-act drama festival circuit. It’s not that often that you get the opportunity to direct a newly written play and I hope I do justice to the challenge of bringing the characters and the situations portrayed in this play to life for the audiences to enjoy. I cannot praise Kieran highly enough for his courage and skill in writing such a fantastic play.” Although he is keen to point out that you don’t have to be from Letterkenny to enjoy it. “While the situations and characters in the play are based in the town of Letterkenny, they are as relevant in any part of Ireland during the turbulent times in which this play is set.”

The play depicts how the central character of Brendan McDevitt (Eoin Callaghan) was affected by the seismic events unfolding around him – from World War 1, through the War of Independence and up to the Civil War – and shows how these events convinced him to gradually move from the peaceful Nationalism of the Ancient Order of Hibernians into the more militant Republicanism of Sinn Féin. This life altering decision will have far reaching implications for both himself and his family. The various decisions he makes throughout his journey are all influenced by those around him, from the attitude of his parents Barney (Kieran Kelly) and Cassie (Elaine Gillespie), the actions of his brother Michael (Loic Cech), his neighbour Mary (Laura Doherty) and the political allegiances of both the local priest Father Crawford (Michael Leddy) and the persuasive Doctor McBride (Martin Hasson).

The play opens in An Grianán Theatre, Letterkenny on Tuesday 13th February 2018 at 8pm prior to touring the drama festival circuit throughout February and March. It will also be performed in the Amharclann Ghaoth Dobhair on Wednesday 21st February. For more details, find the Letterkenny Music & Drama Group on Facebook and for tickets for what promises to be a dramatic night of entertainment contact An Grianán Theatre on 0749120777 or www.angrianan.com.

Your ticket for the: New local production premieres at An Grianán