Our young curators for Lasta are Ailis Cross Gorman, a film artist from Inishowen and Fergal Lonergan, a third year drama student at Trinity College Dublin. 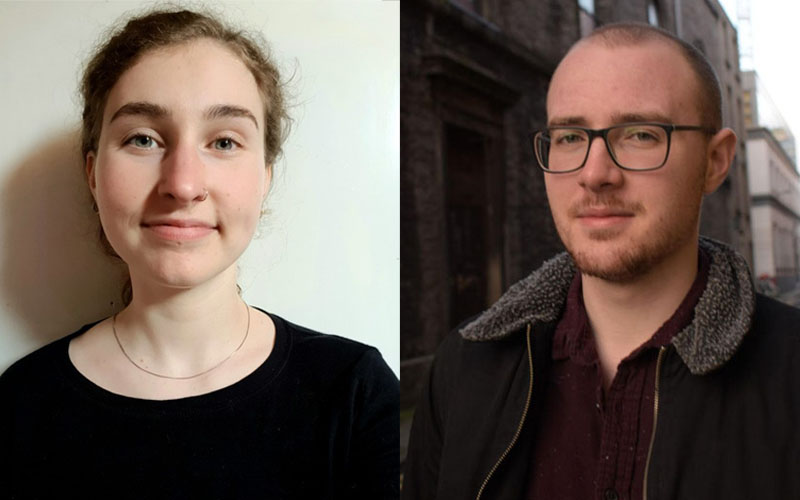 Hello! I’m Ailís Cross-Gorman, a film artist from the tiny village of Muff, Co. Donegal which -contrary to popular belief- actually does exist. I say film artist, but I like to experiment with a range of practices including painting, installation, animation and filmmaking. I am also interested in poetry and sculpture and how art can bridge the gap between disciplines. For as long as I can remember I have had a flair for creating which can partly be attributed to my dad’s influence. My father is an oil painter by trade and has instilled in me a desire to communicate through imagery and an awareness of the significance a visual experience can have for people.

At University I studied Creative Arts and took modules in Fine Art, Film, Creative Writing and Theatre. This gave me a better understanding of the various creative disciplines and I discovered that despite their differences; the common goal of all artforms is to connect with people and to enrich our human experience by doing so, an ethos which has become central to my practice. Growing up surrounded by the stunning landscape of rural Ireland –and being away from it- has given me a deep appreciation for the beauty of the natural world and an innate desire to protect it, which has undoubtedly had an impact on my art and filmmaking.

My film ‘Freshly Clicked’ is an exploration of the effects of consumerism on the environment and was awarded ‘Best no Budget Film’ at the Wales International Film Festival and the ‘Northern Exposure Award’ at the ‘Disappear Here’ Film Festival in Ballyliffin, Co. Donegal. In my filmmaking practice I am interested in breaking away from traditional, narrative methods of filmmaking. Also central to both my filmmaking and curatorial practice is prioritising the immersive experience.

Eyo, I’m Fergal Lonergan. I like theatre and I don’t really like talking about myself so we’ll keep this brief.

I was born in Letterkenny about one year after the Grianán opened, and have since spent the better part of life in the building in some form or another. My theatrical career started in An Grianán Youth Theatre, and from there I’ve done bits and pieces for all kinds of shows over the years. I’ve performed in a couple of shows for the Earagail Arts Festival, such as An Grianán’s productions of Blackadder Goes Forth and The Selkie, both of which gave me the privilege of working with people far more talented than myself.

More recently I’ve resigned myself to more backstage roles such as stage management, tech and now I guess the wonderful world of programming. I’m currently studying Drama in Trinity College Dublin, where I’ve discovered I enjoy academic work quite a bit, focusing on digital form and application of theatrical phenomenology to video games. My hobbies include having questionable taste in games (lmao play moon) and machine knitting.

Your ticket for the: Lasta: Meet our young curators