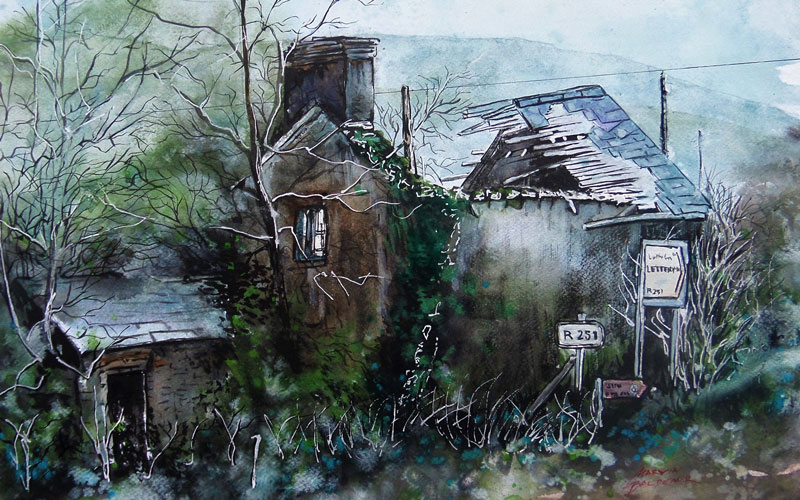 Marvin Baldemor sadly passed away in January, at the age of 50. At the time of his death we had been planning this exhibition of his work. With the co-operation of Marvin’s wife, Isabel, this exhibition goes ahead as a celebration of his life and work.

Of his work Marvin wrote:

“As a self-taught Filipino artist based in Donegal, I continuously experiment with new artistic concepts. This led me to discover, that old and tested art processes could be applied on non-traditional materials as mediums, and that the final products are often visually appealing works of art.

“Lately my appreciation for watercolor and mixed media has grown due to its flexibility and ability to creatively express the artist’s voice. When asked to label the type of work I do, I usually describe my paintings as “interpreted realism”. Rather than portraying my subject matters as they naturally exist, I prefer to convey everyday objects in a fresh and novel perspective through my paintings. I believe that it is my job, as an artist, to paint not what I directly see but how I interpret them. In a sense, my works are the result of my attempts of making even the ordinary and mundane extraordinary.

“Innovation along with everyday mundane events is my inspiration in creating new crafts. While acrylic, watercolour, pen and ink on canvas, wood and various art papers are my tools, the Plaza, the marketplace, churches, and various sceneries and the people around are my favourite destinations. When conveyed on paper or canvas, they have the potential of transforming into beautiful works of art. These traits are what I consider as ‘the soul of the place’.”

Marvin lived in Letterkenny for almost 14 years, capturing the local landscapes and historical landmarks based on the method and design principles he learned from his homeland in the Philippines.

Marvin won several art awards in painting competitions run by The Art Association of the Philippines as well as art competitions here in Ireland and in U.K. He was one of 25 finalists of the Windsor and Newton 2000 Art Competition. In the year 2004-2007, Marvin was selected in the Northwest Artist Exhibition in the Iontas 17th National Small Works Art Competition. One of his works was selected in The Irish Art Awards 2007 and 2008. He was also selected to exhibit in The Art Project, Autumn Art exhibition 2008 in the Central Bank of Dublin.

Marvin was a Gallery Prize Winner of the Derek Hill Easter Open Art Competition 2018 & 2017 and was selected in the RUA RED Winter Christmas Open Competition 2017 in Dublin.

In 2010, Marvin was invited by Philippine Ambassador to Ireland H.E. Ariel Y. Abadilla along with two renowned Filipino artist to host the first art exhibition in The Philippine Embassy in Dublin. His paintings were also donated in the Art Collection to Ireland’s largest university, the University College Dublin (UCD) in 2012.

Marvin held the 1st ever Philippine Art Exhibition in Beirut, Lebanon entitled ‘A Journey of Colors’, from June 07th to 15th 2014, with the help of the Philippine Embassy in Beirut and Philippine Ambassador to Lebanon, H.E. Leah M. Basinang-Ruiz. This would not have been possible without the support from the Lebanese sponsors, credited Lebanon’s top private companies, such as Solidere, Lebanon’s foremost reconstruction and development company, Bank of Beirut Finance Western Union, a leading financial institution and Beirut Waterfront Developmental SAL, developer-owner of one of the most prominent transformation projects in the country, Zaitunay Bay and Le Yacht Club-Beirut. This historic exhibition marked a hallmark of collaboration in the field of arts and culture between the two countries.

Furthermore, some of his recent group art exhibition in 2015 were held in The Courthouse Gallery in Ennistymon Co. Clare, Leitrim Sculpture Centre in Manorhamiltson and The Hyde Bridge Gallery in Sligo.

On June 09th 2016, Baldemor’s latest painting depicting the iconic Our Lady of Lebanon in Harissa was exhibited in Grand Ballroon of Phonecia Hotel in Beirut, hosted by Philippine Embassy in Beirut for the 2016 National Day Reception to celebrate the 118th Anniversary of the Philippine Independence Day attended by members of diplomatic and consular corps.

Your ticket for the: Exhibition: Marvin Baldemor