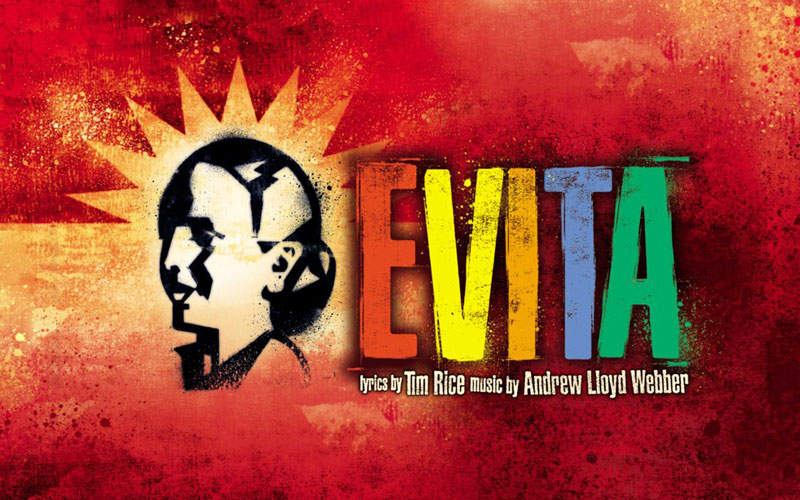 In January 1944, the singer, actress, and radio presenter Eva Maria Duarté met Colonel Juan Peron at a charity fundraiser in Buenos Aires. Both were ambitious people who were going places, and each saw in the other a kindred spirit.

They married the following year, and Eva threw herself into politics with the same commitment and ambition that characterised her rise to fame as an entertainer. With the support and encouragement of his Eva, Juan Peron became Argentinian president in 1946, but in the eyes of many, the real power behind the throne was his wife, who became affectionately known as ‘Evita’.

She died of cancer in 1952, at the age of 33, shortly after being delared ‘Spiritual Leader of the Argentine Nation’ by the Argentine Congress.

But who was Eva Peron?

That’s the question Tim Rice and Andrew Lloyd Webber ask in Evita. It began as a concept album in 1976, with the stage musical opening on the West End two years later. The musical starts with Eva’s death and funeral, and them looks back over her life through the dispassionate eyes of Ché, a member of the public who acts as a one man ‘Greek chorus’, narrating and commenting on what’s happening on stage.

Packed with familiar songs, most notably of course the iconic “Don’t Cry for me Argentina”, Evita takes a warts and all look at the life of one of the most remarkable women to grace the stage of international politics.

Your ticket for the: SOLD OUT Evita – Letterkenny Musical Society