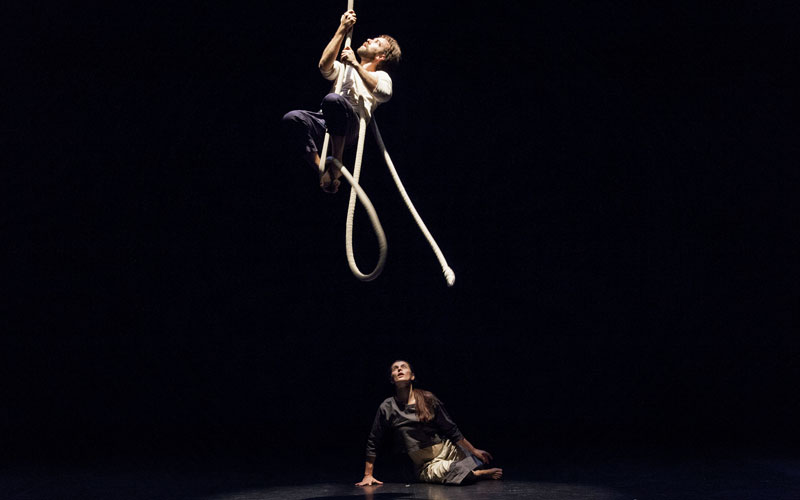 “Two roads diverged in a wood, and I, I took the one less traveled by, and that has made all the difference” Robert Frost – The Road not Taken

Two roads, two ways … but only one choice.  Diverged is inspired by the poetry of Robert Frost to tell the inner struggle that occurs between logic and instinct when you have to make a decision.

A dancer embodies the role of logic, she is associated with the archetype of the Earth, and an air acrobat is the instinct, he is associated with the Air archetype.  Imagine the scene cohabitated by these interpreters and divided by a rope.  At the beginning the characters are the mirror of each other, move in unison, but in their evolution occurs gradually and each manifests its own drive toward an element: the land on one side, the air from the other.

The rope divides the scene, as to indicate graphically a boundary between spaces, but with defining of character of the actors become a contentious issue: the metaphor of a power struggle. The impulse of the characters toward opposing spaces generates tension, which increases gradually to result in a conflict that sets new boundaries: the floor becomes the habitat of one, the air of the other. It is clear, however, that this solution leads to unhappiness of both: the division and loneliness living in their elements makes them vulnerable.

For this reason, the performers are compared again, have changed and matured than the first time, disillusioned by the experience of solitary life in their element, they are willing to deal with conflict differently, to dissolve it and to transform it into play; This new approach leads them to a compromise, a balance that respects the nature of each.