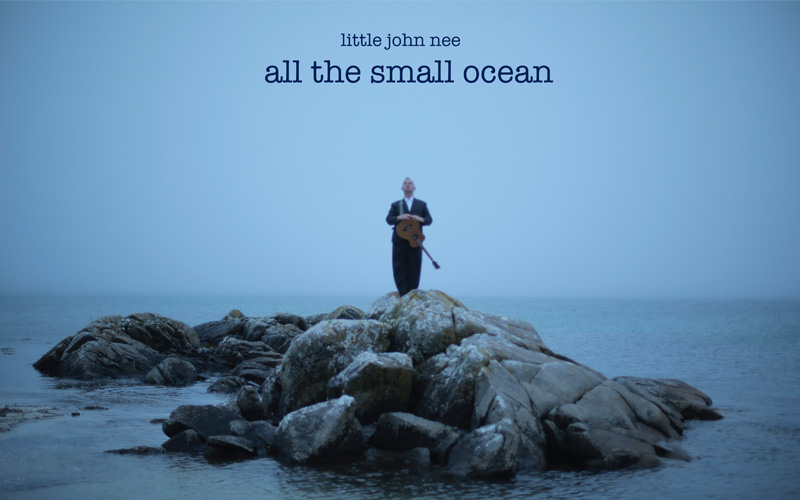 “all the small ocean” was conceived in anticipation of the lockdown ending; during long days and nights of isolation, a longing for gallivanting grew. The result is a surreal comic meander-dance from the north to the south, down the west with a turn to the east; new songs and stories that delight in the minutiae of an odd island experience.

Little John Nee had great plans for an Arts Council Residency, that would draw him away from dependance on virtual culture towards a more human experience in the beautiful environs of the Atlantic coast, kind of like it was “before the television” only maybe more punky. Instead he ended up in his garage singing to his iPhone and hoping the broadband would hold out, gallivanting in a 2km radius and smiling at masked shop assistants with his eyes; to say that he will be overjoyed to be in your sublime company would be an understatement.

Little John Nee is a writer and performer based in the West of Ireland; his style of storytelling theatre with music has won him international recognition. Throughout lockdown he has been prolific creating over 50 livestreams, a radio play “The Jumpin Inn”, outdoor theatre “Tilt of the Sky”, and film, including an award winning collaboration with Laura Sheeran “Drone Bone Jetty” which was part of this residency. Currently an Arts Council Artist in Residence, with An Grianán Theatre, the Town Hall Theatre Galway, and the County Arts Offices in Donegal and Galway; he is an associate artist at Siamsa Tíre.

From the archive: Little John Nee on planning his 2021 residency

Register for Event: all the small ocean – Little John Nee

Your ticket for the: all the small ocean – Little John Nee