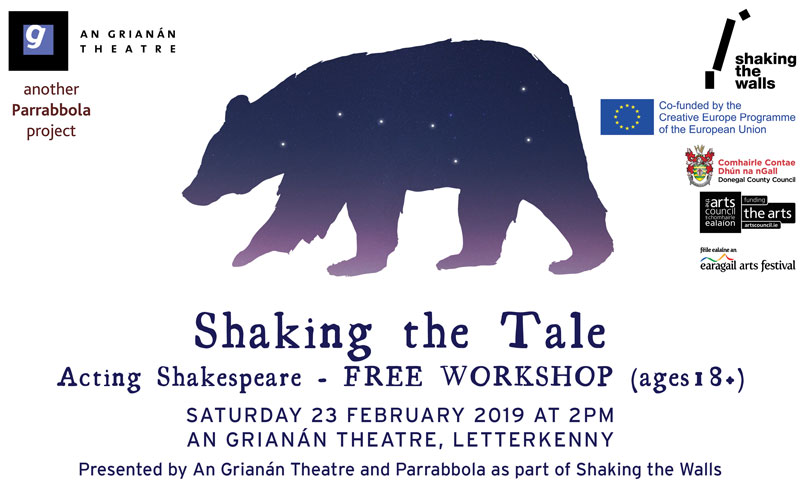 Our second workshop for Shaking the Tale. Newcomers welcome!

This workshop is facilitated by the theatre director, Philip Parr, of Parrabbola Theatre Company.
This is the second workshop of our two-year, Creative Europe funded, Shaking the Walls Project. In July 2019, An Grianán Theatre will be producing an off-site, immersive presentation of Shakespeare’s The Winter’s Tale, in partnership with Parrabbola Theatre Company, and directed by Philip. The production will take place in Donegal and Derry, crossing the borders, the traditions and the waters of the north-west.
We are looking for actors and participants from the local community to take part in this unique theatrical event.
Whether you’re an experienced actor or a complete beginner, the workshop is free and open to everyone aged 18 or over.
Please wear loose, comfortable clothing and bring water and snacks.

Two Kingdoms, Sicilia and Bohemia divided by an ocean. Two kings, raised together, but at odds over the love of a woman. Lost princes, prison sentences, tragic deaths, bears and ocean voyages, and finally, a mysterious and magical ending that restores peace between the kingdoms. It is a problem play, a text with multiple personalities, but ultimately it explores conflict, reconciliation and borders. It is also Shakespeare’s Brexit masterpiece.

Alongside a wide ranging freelance practice as director of theatre, opera and festivals, Philip is Artistic Director of Parrabbola, who make large scale community plays and events in the UK and across Europe. He is co-Director and Programmer of the York International Shakespeare Festival, with a determination to bring exciting and innovative interpretations of Shakespeare to York, alongside the best independent UK productions. He is a founding council member and Secretary of the European Shakespeare Festivals network where he collaborates with colleagues across Europe to create shared programming and initiatives.

Previous producing includes directing the Swaledale Chamber Music festival, and programming theatre and dance for the Bloomsbury Festival in London and for Kingston Welcomes Korea.

Current and recent Shakespeare productions include a solo performance of Henry V [man and monarch] which tours internationally, Hamlet: Tears of a Chameleon, in Seoul, a collaboration with choreographer Hobin Park and the dance company Zero Point Motion, FEAST – a new play for six actresses exploring Shakespeare’s female characters, and a site specific, promenade performance of A Midsummer Night’s Dream, with 80 community actors, for this year’s Craiova International Shakespeare Festival in Romania. In 2019 he will direct a cross border, site specific production of The Winter’s Tale across Lough Foyle between Northern Ireland and the Republic, as part of a European funded collaboration – Shaking the Walls.

As a writer and translator, he has written librettos for opera and music theatre, as well as for theatre, and is currently working on scripts for a play about immigration, and collaborating on a site specific heritage piece in Norfolk.

Your ticket for the: Acting Shakespeare – Free Workshop